Though my day job is being a librarian, I don’t get asked much what I’m currently reading. It’s actually a point of annoyance for me, since I rather enjoy discussing books with people. So I’ll use the fact that I have a blog I’m not doing much with to post some of my thoughts of my reading pile.

Yesterday I finished reading two books, and both put me in a very pensive mood, though both were dramatically different. 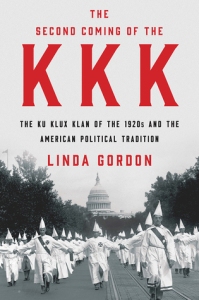 The first book I finished (after picking at it over the course of a week because the week was pretty crazy) was The Second Coming of the KKK: The Ku Klux Klan of the 1920s and the American Political Tradition by Linda Gordon. I have always had a fascination with the Klan as a topic. I’ve lived in two areas where the Klan was active (northern Georgia and northern Indiana) and the closest brush I’ve had with them is the time I was in a production of The Laramie Project at Purdue North-Central, and the president of the Gay-Straight Alliance had been told through family members with connections to the Klan that the Klan would protest the production. Ultimately they did not, but it was still a troubling time for a few weeks.

Gordon’s book focuses on the second iteration of the Klan in the early 20th century. The original Klan had come out of Reconstruction era bigotry and white male anger, but had died out over the last couple of decades after the Civil War. The resurgence of the Klan found it far more organized and ritualized (this is when the infamous Kloran was written), and built out of a response to the romantic interpretation of it in D.W. Griffith’s The Birth of a Nation film. It was presented as more of a fraternal order that would benefit members’ social and business standing (so not as secretive in many respects), as well as being a front to support white supremacy and push back immigrants and anyone not their version of “white” (African-Americans were naturally the main group discriminated against, but this Klan was anti-Semitic and anti-Catholic as well). I know enough about this revival of the Klan to know that it fell from prominence after only a few years due to a great deal of corruption at many levels of the organization, mostly notably that of Grand Dragon D.C. Stephenson.

My big takeaway from the book, and one of the reasons I picked it up, was learning about the women’s activities with the Klan at this time period. A lot of recruitment was done through churches (many Protestant ministers were Klan members), and as such women’s Klan involvement was in a way an extension of any church auxiliary.  Oddly enough, the women of the Klan were supportive of women’s suffrage – a progressive cause you wouldn’t necessarily expect from a hate organization at the time. Though the Klan was initially ambivalent or a little against women having the vote, once women did get the vote it was seen as a boon for white supremacy – wives could help vote their causes into local government.

The book mostly focused on chapters of the Klan in northern states, which was interesting to be sure, but I would have appreciated some more insight in how the Klan in the southern states was at the time. (Other books I’m interested in reading on this topic in general are Blazing Crosses in Zion and Ku Klux Kulture: America and the Klan in the 1920s.) 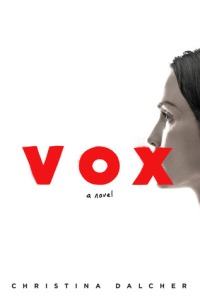 I also read a novel in a day, which I don’t always have the pleasure of doing often. The book was Vox by Christina Dalcher, which comes out in August (a privilege of being a librarian is I have access to digital advance reader copies of books well before their publication date). This is a dystopian novel that I identified very quickly as a The Handmaid’s Tale readalike (I’m obsessed with and horrified by the TV show, but loved the book beforehand) in which a theocratic government has taken charge of the country, and women are kicked out of the workforce and are only allowed to speak 100 words a day. Every woman has a counter on her wrist that keeps track of her words, and gives a shock if she goes over.

This was a fast-paced read, with definite influences of our current administration and Handmaid’s Tale plots. Perhaps at times a little too fast-paced, but I could easily suspend my beliefs for the sake of the story.  Jean McClellan, the main character, is complex and imperfect, and that kind of made me love her quite quickly. I understood the flaws and believed them. She had the politically-active friend who warned her what was to come, and she was blind and privileged enough to ignore the signs. She’s a brilliant scientist who is suddenly thrust into a role and reality that takes away much of the joy in her life, and she doesn’t know how to fix it until an opportunity falls in her lap that gives her a glimpse of what is to come, and also a chance to make a difference.

I finished this book and felt a great need to dig out my pussy hat, strap on my Chuck Taylors, pin on my “Love Trumps Hate” button and get marching again because I DO NOT WANT any of these dystopians to happen in any shape or form. We see shades of our current reality in Vox, in Handmaid’s Tale, in Sinclair Lewis’ It Can’t Happen Here, and it’s chilling and disconcerting. I don’t want to be bold or blind enough to say that we will for sure avoid the fall from grace we see in our fiction worlds, but it does give one pause and a desire to use that fire in the belly and do something about it.

Needless to say, I need something a little light-hearted to follow this all up with, so I may give Hope Never Dies: An Obama/Biden Mystery from Quirk Books a try to cleanse the palate 😉